Happy 2018 everyone!!!! I am looking forward to a really good year. I hope you are too! There are some goals that I would REALLY love to accomplish this year that I REALLY missed the mark on in 2017. Namely, I am still nowhere near figuring out what I am going to do career-wise in this second half of my life. Be that as it may, 2017 was still a REALLY good year! Some of the highlights include: me turning 51; traveling all over the place watching my youngest son play college football; celebrating my 26th wedding anniversary; going on our second, annual New England adventure, which included Montreal and Quebec City this time; writing over 47,000 words as I started a new book based on the mid-life crisis I have been trying to climb my way out of (Fiftysomething: The Misadventures of Charlotte Grayson); as well as having the pleasure of seeing my oldest son graduate college! Oh yeah, and I hit the 6-mile mark on the treadmill although it takes me at least 75 minutes to do it! So now this fiftysomething has been doing 6+ miles, 5 days a week. Such a blessing at 51 (my personal best in 2017 was 6.3 miles in 83 minutes)! I could barely do a mile at 18, so I am going to focus on that and the other positives I mentioned instead of all of the areas where I missed the mark!

With all of that said, since I keep forgetting to include some of the pictures of my Christmas outfits in any of the videos I posted in December, I thought I would recap my year in pictures for anyone who is interested:

Here I am on a good afro day and wearing another Marshall's original! LOL An Ann Klein dress with a Polo turtleneck underneath. Surprisingly, very affordable! Some things never change, #DiscountShopper4Life

I turned 51 on the 12th, and it was the first time in over 20 years that it was just me and my hubby. Both boys were away at school, and we didn't travel like we did for my 50th. As a result, my husband said we could do whatever I wanted to do, so I chose a trip to an upscale outlet mall (they had Ferragamo and Jimmy Choo!) about an hour from us that we had never been to, and then we visited the MGM Grand casino (right outside of DC) just to check it out even though I don't gamble. He also indulged me by stopping at a number of Marshalls and TJ Maxx stores along the way as we went home! It was a fun weekend, and I got to pick out some pretty cool pieces to add to my wardrobe. I also got a "girl weekend" away from home to chill and do a little more shopping as well. The dream of an only-child! LOL

This is probably the last time my youngest son will spend his Spring Break with his mother. It was a fun weekend because I drove almost nine hours to pick him up from school, and then I turned around and drove almost five hours to Times Square. We spent the weekend at one of our favorite hotels there, ate at our favorite restaurants (i.e., Dallas BBQ and Planet Hollywood), checked out some of his favorite shoe stores, watched two NCAA b-ball tournament games at Madison Square Garden, and of course, we went to Marshalls and TJ Maxx! It was great! So glad I got pictures because now that he is 21, it's a wrap! LOL

I visited my son at school again to watch his Spring game, and he saw me out walking, so he offered to give me a ride back to my hotel on his scooter. He really wanted me to try it because he thinks it is the best thing since sliced bread! Although I screamed a lot and kept telling him to slow down, I see why he likes it so much. However, I am not brave enough to drive it -- no broken bones so far, and I don't intend to start now!

As it got warmer, I started sporting some of my many wrap dresses (I have this same dress in at least four different colors!). I found this Calvin Klein dress, and a number of others, at Ross for $29.99. Wrap dresses definitely make you look slimmer. The open-toe Coach pumps helped too (courtesy of Marshalls for $69.99)!

The hubby and I got to visit Newport, RI, one of my favorite places to visit. If I were a woman of means, I would certainly have a home, and maybe even a yacht there! LOL Oh yeah, I was hobnobbing with the wealthy wearing a dress I found in the juniors section of Marshalls for $16.99! I'm also wearing a pair of Coach sandals I bought from Ross! You couldn't tell me I wasn't doing it big!

My oldest son and I took a trip to visit my youngest son right as football camp was ending. I wanted the boys to have a chance to hang out before school started since they wouldn't see each other until winter break. Of course that was the perfect opportunity to test drive the "mid-life crisis mobile of my dreams" -- A Dodge Challenger (an RT hemi). My best driving experience EVER! The Ugg espadrilles are not from Marshalls, but the first pair of them I ever owned were from there ($49.99) - the most comfortable shoes I've EVER owned!

My husband and I were blessed enough to go on another New England adventure with my cousin and her husband, which included a visit to Montreal and Quebec City. In this picture, I am in Montreal wearing a dress I found in the juniors section of the St. Foy mall Marshalls. It was less than $20! Yay!

As a part of the New England adventure, we spent the day in Hull, MA, and took a ferry ride into Boston Harbor. It was so much fun, and I had the best, and only, blue berry cobbler I've ever had at Legal Seafood.

Can you believe I met this man at 19??? We have been best friends for 30 years, and we just celebrated our 26th wedding anniversary on October 12th. We celebrated in the Hamptons (during the off-season, when we could afford it!). In this picture, we are at the Montauk Yacht Club, where I wanted to take my cousins for a part of our New England adventure, but we couldn't afford it! Such a blessing to be married this long and to get to go somewhere so nice. Montauk is SO beautiful! P.S. We were going to be in NY a few days later for our son's game anyway, which is how I got a chance to go! We don't just GO to the Hamptons! LOL

Anyone who knows me knows I HATE FOOTBALL! However, I love my son, and because he plays football, I spent a LOT of time this year watching it. As a way to look forward to the games, I did one of the things I love best -- I put together over-the-top outfits fit for a diva, affordably, of course! Here is one especially for a game -- a faux fur jacket from a Marshalls in Albany, NY ($49.99), the skirt was from Marshalls as well ($24.99, I think). So were the boots (by Ivanka Trump $39.99), the sunglasses ($9.99) and tights (less than $10)! Fortunately, my son is used to my foolishness by now. I do still get eye rolls from him occasionally! LOL

Between watching one son play football and the other son graduating college, as well as celebrating the holidays, here are some of the outfits I chose for the occasions:

Well, that's about it for my year in pictures except for the exercise milestone. I must admit that me being friends with the treadmill has been one of the best secrets to me looking and feeling my best at any age. I pray that I am able to continue this for many years to come.

In the meantime, I must say that even though I have been feeling like a big fat whiner and the new year has just started, I am TRULY thankful for every event, milestone and memory that I just shared with you here. It is all such a tremendous blessing that I should never take for granted. With that said, I am going to put on my big girl panties, and resolve to work harder in 2018 to make my dreams happen. How about you?

Keep Me Posted & Be Blessed!

Wardrobe Tweaks Can Help You Look Younger & Sexier, and They Don't Have to Cost a Fortune!

Doing What It Takes to Keep It Moving!

Bold & Beautiful on a Budget!

Wardrobe Tweaks Can Help You Look Younger & Sexier, and They Don't Have to Cost a Fortune! 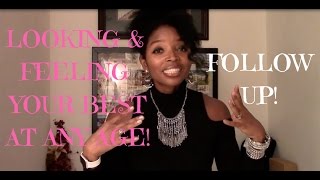 Welcome to the Looking & Feeling Your Best @ Any Age Blog/Vlog